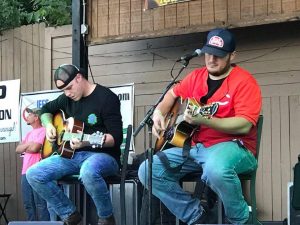 In this episode of Backstage Hall Pass we take you behind the music at JD Legends in Franklin, Ohio. The show features the audio podcast of a “Live” Video Interview with Acoustic Duo, Michael Rotundo and Cody Doench prior to their opening for Country Music Recording Artist, Dylan Scott.

Michael Rotundo is a 24 year old country singer/songwriter based out of Southwest,OH . He was born and raised in Trenton, Ohio and attended Edgewood high school. Upon graduation, Michael enlisted in the United States Army. He spent two years stationed in Europe, and another two in Georgia. Michael discovered his love for country music during his time in Georgia. He picked up a guitar for the first time at 21 years old, and hasn’t looked back. Since then, Michael has been playing shows in southwest Ohio, and Indiana. His artistic influences include Luke Combs, Brantley Gilbert, Jason Aldean, Ed Sheeran, Sam Hunt, and Toby Keith.

Cody Doench is known as a Dad, Veteran, Firefighter and Patriot who plays his own unique style of Country, Bluegrass and Rock n Roll. When asked about his style of music he simply said “I’m trying to put the old school back in the new school”  We hope you enjoy this episode with these two great guys!

scott November 9, 2017. No Comments on Behind the music with Michael Rotundo and Cody Doench on “Backstage Hall Pass”. Categories: BACKSTAGE "HALL" PASS.